Guide to Driving in North Island

Driving Tips in the North Island

There are differences between driving in the North Island and the South Island of New Zealand. Whether you are planning on driving through busy Auckland, or heading through the countryside, here are some tips to help you.

Top Attractions You Can Reach in Your Rental Car

It's easy to travel around the North Island, with highways connecting all the major towns and plenty of parking available at major tourist attractions. Here are a few sights worth visiting on the North Island:

Travel through the Forgotten World Highway, also known as Highway 43, and experience an intriguing, history-rich tour. The road heads northeast from Stratford to Taumarunui. Along the way, you will witness colonial heritage as you travel through rolling farmland and pristine subtropical rainforests. You will also be given a chance to see the spectacular view of Mt. Damper Falls from the Tahora Saddle, the striking Tangarakau Gorge, and the 180 metre long, single lane Moki Tunnel. 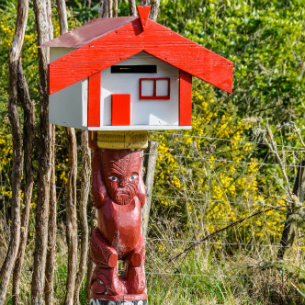 This road was built in the 1930s to provide access to communities reliant on infrequent riverboat services. It's a narrow back country road that runs for 79 kilometers. There's plenty to see along the way. Twenty-eight kilometers from Wanganui, you will see the remains of giant, fossilized oyster shells at the Oyster Cliffs.

See ceremonial buildings in Koriniti, or learn more about pioneer life at the Kawana Flour Mill. The churches at Hiruharama (locally known as Jerusalem) are also worth a visit. Drive up the track to see the carved altar inside the church. It's also famous for the retreat and commune established by famous New Zealand poet James K Baxter in the late 1960s.

Finally you'll arrive at Pipiriki where you can arrange a jet-boat tour to the magnificent river. You can continue to Mangapurua Landing where a short walk will lead you to the Bridge to Nowhere, a huge concrete bridge that is a remnant of the pioneering Mangapurua farming settlement which was abandoned in 1942.

See Mt. Taranaki every time you glance in your rear-view mirror while travelling northeast on Highway 3, as long as it is a clear day. The mountain doesn't always let you see her!

Travel Highway 3 from New Plymouth up the Taranaki coast. Taking the highway is the fastest route to the Waitomo Caves and Hamilton, turning inland at Awakino, 90 kilometres from New Plymouth.

See the appealing Awakino Gorge, located in the middle of Mahoenui and the coast. The edge of the Awakino River will present you little whitebaiting shacks decorate the river banks. A little further along is Mokau, with a few cosy cafés where mouth-watering whitebait fritters feature on the menu from September to November.

If you stick to the main highway, from Awakino, you will reach Waitomo in an hour. But if you're up to adventurous routes, take the minor road north, at the turn-off just outside Awakino. The route runs for 58 kilometers and is a gravel road for the bigger part. Remember: Take care and keep left especially on blind curves. The drive is through attractive sheep country, passing through the Manganui Gorge, and the possibility of a 4-kilometer alternate route down the Waikawau Road to the strikingly isolated Waikawau Beach.

The approximate total driving time from Awakino to Marokopa, including refreshing stops, is three hours, plus another hour from Marokopa to Waitomo.

This road is a spectacular detour to Taranaki, winding past stunning vistas. If the weather is clear and you stop by at the Haggas Lookout you will see an expansive view that extends southward to the volcanoes of Tongariro National Park. Visit the Mangapohue Natural Bridge. From the parking area, you can either take any of the two approaches towards the bridge. To the right climbs over a hill, sloping down into a valley scattered with boulders embedded with oyster fossils, the remains of a seismic shift that thrust up the seabed millions of years ago. The bridge is located on the left side of the boulders. The other path follows a stream through a gorge. The gorge walls climb higher until they meet and form the bridge that closes over the path. Here's a thing or two to remember: Always carry your valuables with you such as wallets and passports. Also, keep the luggage in your vehicle out of sight. This is a good rule for any isolated tourist spot.

About 5 kilometres farther along the road from Mangapohue Bridge to Marokopa, you will see the Piripiri Caves that beckon with interesting fossil legacies. The approach and entrance to the caves are steep and slippery, so make sure that you're wearing sturdy boots or shoes. Also bring a jacket for the cool air and a flashlight to cut through the dark. There are no guided tours but there are trail markers inside the cave.

A few kilometres farther, you will be able to watch the 120-foot Marokopa Falls from a viewpoint reached via a pleasant forest trail. Beyond the Marokopa Falls is the Te Anga Tavern, a good place for refreshments and to meet the locals. There's a fork-road at Te Anga: head north to Kawhia or drive 14 kilometres southwest to the small hamlet of Marokopa, where there's an astonishing lookout point over the coast's black-sand beaches.

Marokopa is about 50 kilometres from Waitomo. You can either turn back or keep on heading south for a more difficult mostly gravel but very scenic route to the Taranaki region. If you plan on heading back to Waitomo, be sure to fill up your gas tank before turning off State Highway 1.