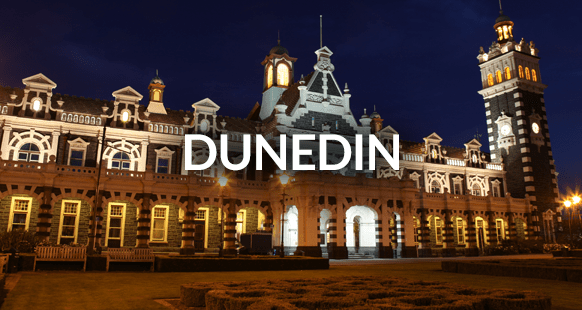 Situated at the head of Otago Harbour, the city of Dunedin is located on the South Islandā€™s southeast coast. Find the best available rates in the area with VroomVroomVroom for an easy start to your next adventure.

International travel into New Zealand from Australia is currently restricted due to COVID-19. If you have an existing booking that has been impacted by these restrictions, please contact usā€‹.ā€‹ā€‹

Quick Facts on Hiring a Car in Dunedin

Flying into Dunedin? We work with six rental brands that service Dunedin Airport (DUD), so for the convenience of having your vehicle ready when you land, consider an airport rental.

As one of the South Islandā€™s top destinations, Dunedin is a hotspot for students and tourists, famous for its Victorian and Edwardian architecture. Here are some of our top tips when driving in Dunedin:

Can I pick up my rental car in Dunedin and drop it off somewhere else?

Yes, but you may be charged a one-way feeā€‹ by our car rental partner. We will include the additional charge in the rates we compare for you.

How far is Dunedin from Dunedin Airport?

Itā€™s about a 30-minute drive between Dunedin Airportā€‹ and central Dunedin via State Highway 1.

How far is Dunedin from Christchurch?

Is travel open between Australia and New Zealand?

Not sure where to go with your hire car in Dunedin?

There's plenty to choose from in Dunedin. Enjoy the compact city centre, with its bars, restaurants and cinemas, or head to open spaces such as the Otago Peninsula. After a day of fun, you can now take some rest in your chosen Dunedin accommodation. To help you out, we've compiled a list of the best and most interesting places in Dunedin. Check out our travel guide below.

Hare Hill is a lovely 60-acre farm located in Deborah Bay on the north side of the Otago Harbour, close to historic Port Chalmers and only 20 minutes drive from Dunedin New Zealand. Hare Hill Horse Treks has brought the unforgettable experience of horse riding through one of the most beautiful places in New Zealand to riders from all over the world. Hare Hill offers various horse riding treks and riding lessons suitable for the beginner right through to the more advanced rider throughout the year. Guests can choose between trails in open paddocks with magical views of the Dunedin harbour and the stunning Aramoana beaches.

Enjoy a fully guided tour to New Zealand's only castle, Larnach Castle, which is famous for its fantastic views and "Alice in Wonderland" themed gardens. It is not only a trip to this iconic landmark - you also get a comprehensive tour of Dunedin city included. See the Larnach tomb, Baldwin Street - the world's steepest, Otago University as well as the historic Railway Station building amongst other Southern delights. Special Cruise Ship day tours are also available. Departing from Port Chalmers tours last 6.5 hours or alternatively from the Dunedin i-Site and 5.5 hours. If you prefer touring at night, you can always join their Glow Worm Tour where you will be taken to see these mesmerising and enchanting creatures from a bygone age. 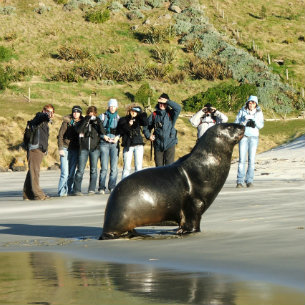 Explore Dunedin and its surroundings by joining the Elm Wildlife Tours' Otago Peninsula Encounters. This popular tour gets you up close to all sorts of animals, including rare yellow-eyed penguins, little blue penguins, NZ fur seals, and Hooker's sea lions. You may also find albatross at the headland of Taiaroa and other wildlife animals at the bay and lagoons of Otago Peninsula. The family-owned business has been providing tours for more than 20 years and their expert guides can assure you of the best wildlife experience.
Olveston Historic Home
Address: 42 Royal Terrace
One of many fine Victorian and Edwardian examples of architecture and lifestyle available to explore in Dunedin. Olveston House is kept just as it would have been when it was a family home in the early 20th Century. Guided tours of the house are available, with the local knowledge of the guides being a highlight. The house is set in a one-acre garden of national significance. For a visit with a difference, add a game of croquet and a cup of tea to your experience. Don't miss the 1922 Fiat 510 Tourer, belonging to the house's original owner, David Theomin. The car has been restored to its former glory over two years.
Cadbury World Chocolate Factory
Address: 280 Cumberland Street
This long-standing Dunedin business is at the heart of the community. It is the centre for the annual Cadbury Chocolate Carnival when the city goes bonkers for chocolate each July. At any time of the year, you can tour the factory. The most popular tour lasts for 60 minutes and is particularly busy in the school holidays. Book in advance if you can.
Toitu Otago Settlers Museum
Address: 31 Queens Garden
An innovative museum housed in the original Edwardian galleries, of Dunedin's former New Zealand Rail Road Transport Building. Themed galleries tell the stories of indigenous Maori, early Chinese settlers and subsequent waves of migrants. A highlight is Josephine, one of just a handful of remaining Double Fairlie Locomotive engines in the world.

This award-winning motel complex is known for its beautiful architecture and central location. Guests staying at 858 George Street Motel have easy access to Dunedin's major attractions, including the Botanic Gardens, Cadbury Chocolate Factory, and Forsyth Barr Stadium. There are also numerous restaurants, cafes and shops located nearby. Whether you are travelling solo or with your family, you are sure to find the perfect accommodation. They have studio rooms, one and two-bedroom suites, executive suites and an accessible unit. Each room is equipped with modern facilities such as complimentary WiFi, flatscreen TV, DVD player, fridge and microwave oven.

This self-contained luxury accommodation was established by general practitioner Peter Cooke and psychotherapist Anna Moore, who both decided to work part-time to pursue their dream of building a garden retreat. The Eco accommodation has been built with sustainable materials and has received a 5-star rating from TripAdvisor. It was also named as the most beautiful accommodation provider in 2013 by the Dunedin City Council.

This cafĆ© is famous for its delectable food, great staff, and amazing views. They are known for having the best coffee in the area as well as their homemade venison, traditional Cornish pasties, chicken and mushroom pies, and freshly-made ice cream. The best way to start your day is with a New Zealand Breakfast. For lunch, their specialties include the Fisherman's pie, toasted sandwiches and huge burgers.

Etrusco at the Savoy Restaurant

Ranked #1 of 210 Restaurants in the city and awarded "Certificate of Excellence 2014"- Tripadvisor, it's not surprising to expect such an exquisite interior that truly takes you to Italy the moment you step through the doors. Not to mention the food, if the romantic atmosphere doesn't capture you, the food will sure do the trick.

Nestled on the esplanade of the St.Clair beachfront, you'll discover a slice of Italy as you enter the romantic atmosphere of this classy Italian restaurant. The great set up and spectacular view are only the beginning of this dining experience.

Go Back
Customer Reviews for Dunedin Car Hire
Rating: 5 / 5 based on 32 reviews
Nearby Dunedin
Popular Cities